Jet Skyesports is bringing the first-ever LAN event for VALORANT in India with AMD Skyesports Souvenir – Mumbai 2022. Taking place from 30 April to 3 May, four of South Asia’s best teams will be competing for bragging rights and a share of the $10,000 prize pool. The venue will be open to a limited live audience.

The four teams who have been invited to the event are Enigma Gaming (India), Team Snakes (Pakistan), Global Esports (India), and Velocity Gaming (India). They have received the invites based on their past performances in Skyesports tournaments.

The venue will be open to a limited live audience. The invited organisations to the AMD Skyesports Souvenir – Mumbai 2022 will give away tickets to select super fans. Stay tuned to your favorite organization’s social media handles for more information.

Commenting on this exciting tournament, Skyesports CEO and founder Shiva Nandy said, “After a gap of more than two years, we are finally marking a return to LAN events with VALORANT’s first-ever offline competition in India. The first edition of the AMD Skyesports Souvenir in Mumbai is set to be a spectacle like you’ve never seen before. This is just the beginning, though. We have a lot in store throughout the year with more LAN events across different games including some first-party tournaments like the VCT Stage 2 Challengers South Asia, which is being hosted by Skyesports. I am excited to kick off a new journey with the Skyesports Souvenir in Mumbai and can’t wait to continue the legacy in a city near you.”

Riot Games publishing leader, India and South Asia Sukamal Pegu said, “It has been very heartening to see the support from the South Asian community towards VALORANT esports over the past two years. It was time to treat them with an offline event as a LAN tournament provides a different level of competition and intensity. I am thrilled to see Skyesports make this a reality with the AMD Skyesports Souvenir in Mumbai.” 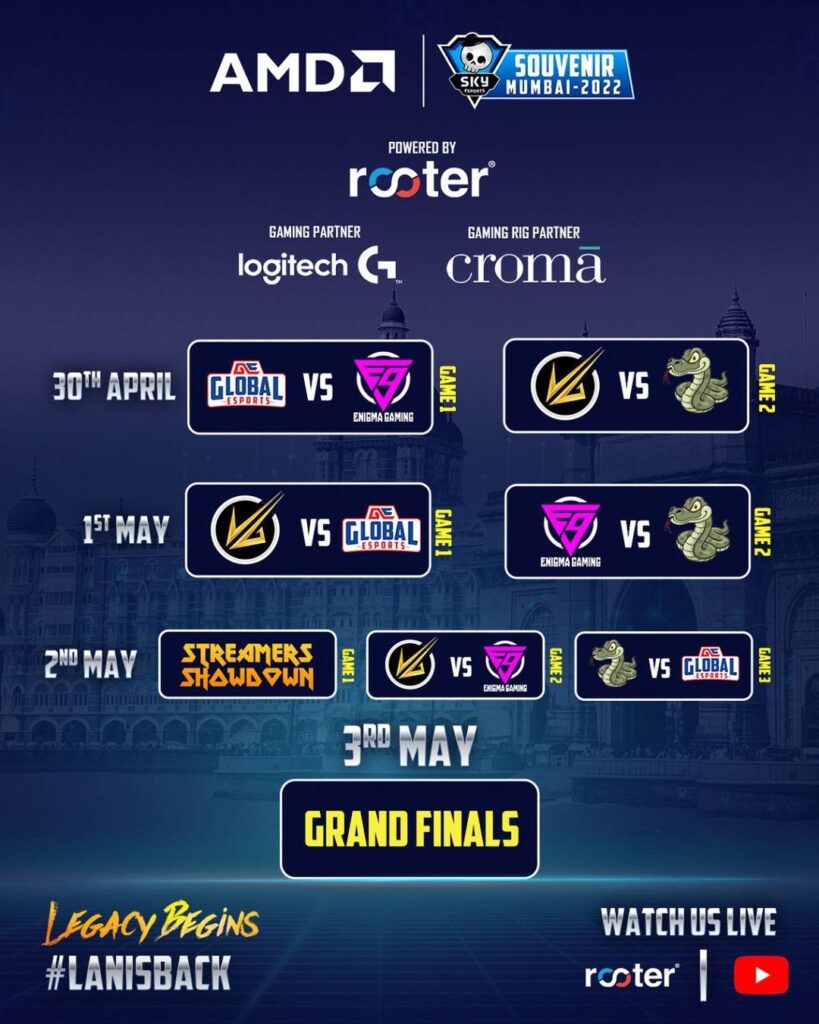 While the Indian teams of Velocity Gaming, Global Esports, and Enigma Gaming will play from the venue, the Pakistani squad of Team Snakes will compete remotely.

The four teams will compete in a single round-robin format. This means that each team will face every other team once. All matches will be the best-of-three games. The top two teams from the round-robin stage will compete in the grand finals. The winner of this best-of-five series will be crowned the champions of the AMD Skyesports Souvenir – Mumbai 2022.

A streamers showdown with top content creators and professional players will also be held on 2 May to provide additional entertainment to fans.