When it comes to animation, kids are the key target audience of the content makers. At the KAM Summit day two, it was time for us to open the floor for the kids where they could share their insights and views on the animation content and how it can be incorporated in the classroom environment to make studies more fun and interactive.

The kids panel was divided into two parts; first with the Indian kids which included Rudraaksh Mehta, Atharv Singh Rathore, Umana Chaudhuri, Sara Rohit, Kashvi Hundia and second was with the kids from across the globe, Taanish Makwana and Risha Mandal from US, Danilo Aly Voss Nyan from Norway, Sihyeong (Mars) Lee from Korea, Vivika Puranik and Krishna Chaudhuri from India. Both the sessions were moderated by parentune founder and CEO Nitin Pandey. 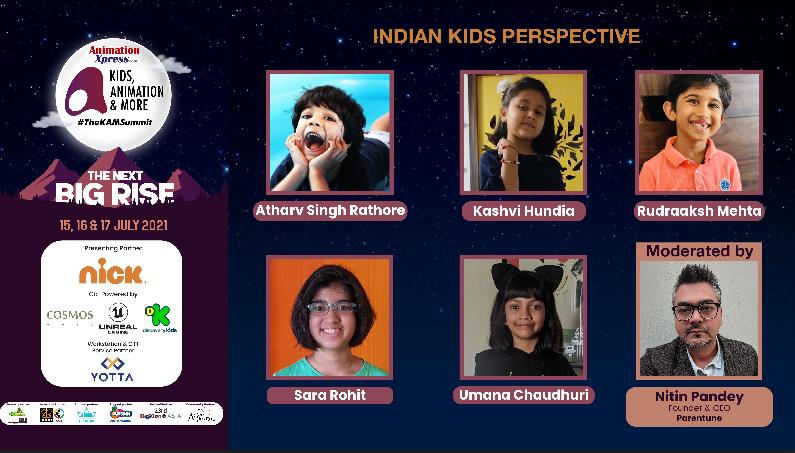 Wanavri then invited Pandey to take over the dias. He kicked off with an open question – what is animation? To that Kashvi Handia replied, “Animation is making a cartoon move and brining imagination alive.”

Imaginations is the key to create animated objects and its very delightful for the creators to see when kids relate with them and the characters become popular among kids. Sara Rohit shared that she likes watching My Little Pony since it is all about friendship and described how Princess Luna brings the moon up at night in Equestria. Among all other charcaters from My little Pony she likes Pinkie Pie as “she really bright, cheerful,punky and she doesn’t lie. She bounces  here and there.” She also showed her artwork which were more dragon focused and shared that she likes Harry Potter and likes painting animals. And if she creates animated movie in future, she would prefer to create a movie on animals, not with dogs though because that is too cliche, but she would prefer more on cats or may be mythical creatures like dragons and so on.

It is true that whatever kids watch today it helps them to open the imagination window. In fact some of their interest reflects in their artwork or in their daily lives. Kashvi shared that she likes Elsa from the Frozen franchise because like Elsa she also likes ice, loves travelling to cold places like Kashmir and enjoys watching magic and thus she could relate with Elsa. She further shared that she looks upto Elsa since Elsa is courageous and therefore she owns Elsa’s gown as well.

Umana Chaudhuri shared her amazing silhouette artwork where a girl in a swing is facing the horizon of imagination and she expressed that she is one of the girls. She likes watching My Neighbour Totoro movie because it has lot of imaginary stuff. “Totoro is a big furry cat who has cat bus to travel around the city which is really amazing.” She said, “If given a chance to make animation, I will make animation version of Harry Potter because I like it very much and also it doesn’t have its animated version yet.”

Umana also shared that she likes 3D animation. She enjoyed watching Luca as she mentioned, “Luca is a half sea animal. When he comes on land he becomes an ordinary boy. The story is about him and his best friend who tries to buy Vespa. I loved Luca because I like 3D animation very much and I am used to watching 3D animated movies often.”

Atharv Singh shared that he likes Optimus and Bumble Bee because they are both strong and growing up he aspires to become as strong as Optimus Prime or Bumblebee. The fact that both the transformers can transform into a car and could travel the world interested him. He also likes Captain America and enjoys drawing it because he enjoys watching how Captain America fights back with all the enemies it the End Game. Growing up he aspires to create an animated movie with Transformers and Avengers who are fighting the common enemy. He happily shared that his birthday matches with Harry Potters birthday which is 31 July.

Little Singham, Avengers and Tarak Mehta ka Ooltaah Chashma are all Rudraaksh Mehta’s favourite characters because they are brave, strong and funny. And he also likes Thanos from Avengers because he was so powerful and takes over everyone.

The session from the kids of India ended with beautiful messages from everyone. Sara Rohit shared, “The lesson I get from the book Wings of Fire is that there is no particular division among anyone, all are special and everyone can get along if they try.” And Rudraaksh Mehta added, “Be brave, be strong.”

Following that, the kids from around the world session commenced where the kids shared their vision and opinion on the animated characters and games and why do they like them. 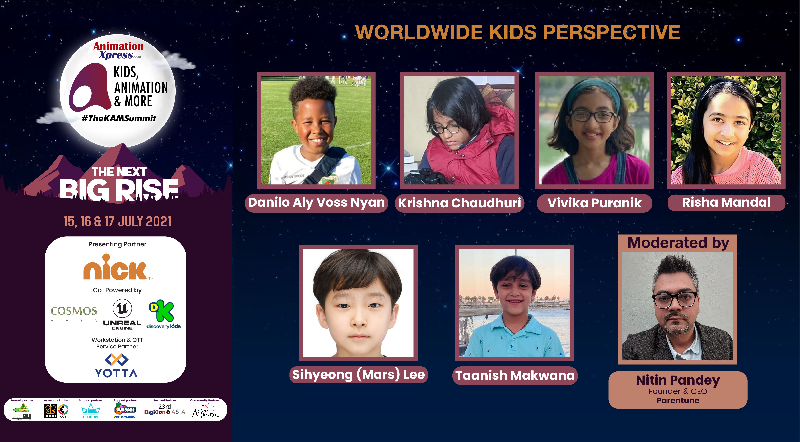 Mars Sihyeong (Mars) Lee shared that he likes Demon Slayer as it is a very good movie and is quite entertaining. “Even though I am Korean, I enjoy watching Japanese movies. Demon Slayer is a high-quality movie and they spent a lot of money making it,” Mars added. Although Kimetsu is about a demon who creates demon who are powerful and does not die except from the sun, he likes it.

Following that Vivika Puranik, who is also a young animator, shared how school and the education system could be funfilled and entertaining and engaging. She shared, “Instead of making online school another boring responsibility, we can actually utilize it. The key is interaction. Not just forcing us to turn on our cameras, but actually giving us a reason to attend the class.” She further shared, “Group projects is one way which can make the classroom scene engaging as it allows student interaction and give us a chance to showcase our work for appreciation. Second could be reversing the role with the teacher could be fun options and finally, activities helps to bring out the creative side in us.”

Krishna Chaudhuri shared that he is fascinated by Lightning McQueen as he likes his attitude of never giving up but sometimes it becomes aggressive. He also likes Mater the Greater and he was drawn more towards the characters than the plot. “I have been drawing cars since I was one or two. Until I was eight or nine, I didn’t draw anything else. Then I started doodling and I also do photography,” Krishna added.

“I love the Boss Baby film. Baby corporation is very fascinating.  I like to play the game ‘Tag with Ryan,” said Taanish Makwana.

Risha Mandal shared how she related to Rapunzel which is her favourite character. She shared, “I was born on the same day as the film released. I love long hair just like her. I like how she’s strong, independent, adventurous, and carefree and I aspire to be like Rapunzel while growing up.”

Danilo Aly Voss Nyan loves playing soccer everyday as it’s his favorite game. He is fascinated towards Ash Ketchum character from Pokemon. “In Norway, we have a lot of snow in winter time. That’s the only time we stay inside and watch films and play videogames; because we have to stay outside in summers,” Danilo Aly Voss Nyan added.

Overall it was heartening to see kids in both the sessions sharing their perspectives and interacting confidently on such a platform. There’s a lot to learn from thes

The sessions can be watched from 45:30